What is new in the taxi world? Our bilingual ‘Update’ summarizes the news of the last days and hours. We recommend using a website-translator because some links can be in foreign languages.   Message of the day Each year, the taxi business pays almost 2 billion Euros for taxes and (social) insurance: The German Taxi Association BZP has published these impressive … END_OF_DOCUMENT_TOKEN_TO_BE_REPLACED 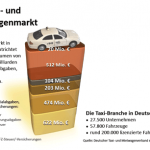 Thousands of London  taxidrivers went on strike Wednesday, clogged the streets of the British capital.   For the protest illegal taxis, rickshaw drivers and ride-sharing apps are the basic targets. For example the UberTaxi service. This is the second protest by London taxi drivers in three months. On June 11 tens of thousands drivers were on strike. Simultaneous actions … END_OF_DOCUMENT_TOKEN_TO_BE_REPLACED