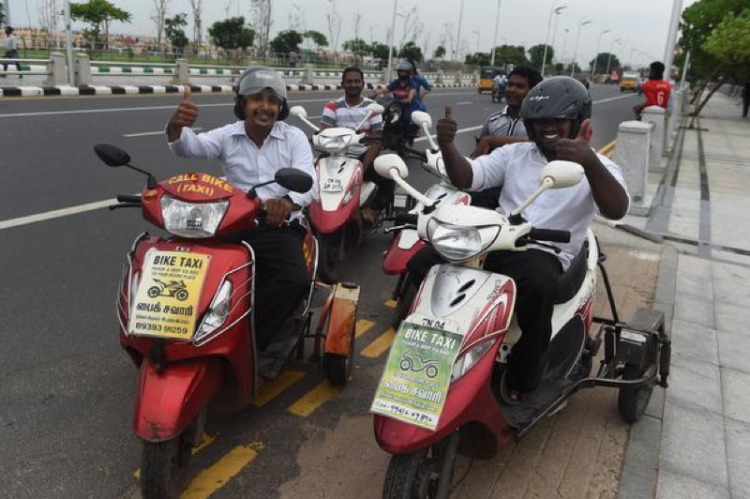 “If there’s one thing that K. Balaji hates more than being unemployed, it’s being patronized,” The Hindustan Times writes in a touching article. “Which is why the differently-abled 34-year-old gave up his job of making PowerPoint presentations for a small company.”

But life went on — he had a scooter and kept himself occupied by riding to meditation classes in the evenings. “I would drop Ramalingam, a friend, every day after class, and he casually mentioned that I should do this as a paid service,” remembers Balaji. “I thought I should give it a try.” So now Tirunelveli in Tamil Nadu (India) has the world’s first differently-abled bike-taxi service.

“So, I approached a young man, asking if he wanted a ride. I felt awkward at first, but I wanted this to work,” he smiles. The youngster, although a little puzzled, hopped on, and gave Balaji Rs. 20 once he was dropped off at his destination. “I was so thrilled,” says Balaji. He knew then what he was going to do with his life — start a bike-taxi service. “But not just any bike-taxi service; one that was operated entirely by the differently-abled,” he adds.

Balaji gradually started making an income sufficient enough to buy his medicines himself. (He has Transverse myelitis). His friend Mohammed Gaddaffe, also differently-abled, joined him, and gave their team the name ‘Maa Ulaa’, for ‘Maatru Thiranali Ulaa’, meaning ‘A differently-abled outing’. Gaddaffe, who until recently taught History in Presidency College, started looking out for more young men to be recruited for their bike-taxi service.

The Maa Ulaa team has six members in all. Balaji told the Times that customers are very encouraging. “Auto drivers at Central, in fact, have arranged for customers so many times,” he adds. He’s had a lot of women customers as well. “The traffic police are friendly too. Once, a traffic policeman stopped me to shake hands with me,” chips in Kuppan. The traffic police also gave them some advice: don’t wait at bus-stops; this ensures that they don’t threaten the share-autos. “Which is why we stand a good distance from bus-stops,” explains Gaddaffe. “Our target customers are those who regularly travel by autos.”

Gaddaffe has formulated a tariff system that ensures fair pricing. “We want to become at least 20-member strong. Only then can we cover the entire city,” he says. “Our team has been approached by a popular app-based taxi service and Vroom, a bike-sharing service, asking if we can join them. If talks go well, we will soon be part of the services,” he adds.

Gaddaffe is now convincing as many differently-abled people as possible to become bike-taxi drivers. “Almost 90 per cent of us are unemployed or are being paid very little for our work,” he says. “This is because employers think that they cannot get much work done from us; they cannot set targets for us.” As a result, a majority of them quit, like Balaji and Kuppan did. “Bike-taxis are a way to address this problem. Since most of us own bikes, it’s all a matter of getting used to talking to customers,” he adds. “We can be our own boss.”

The Maa Ulaa team’s dream is to take their framework to the rest of the State. “Right now, a team is being set up in Tirunelveli,” says Gaddaffe. Balaji says that he has a lot of regular customers now. “Some hop on just for the experience,” he laughs. But he’s more than happy to take them along.