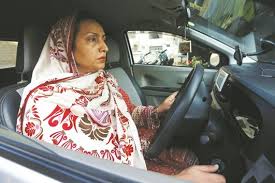 Russian news service RT.com reports how Pakistani taxi service Careem started a milestone project by hiring women drivers in the mostly Muslim country. The operation seeks to empower women and allow them safe job opportunities. The Dubai-based start-up presented the project last week. Currently it is available in three Pakistani cities. However, the company has plans for further expansion. Careem has already hired six female drivers: three in Lahore, two in Karachi and one more in Islamabad.

More unusual for a conservative Muslim country, is that the new ‘captains’, as the drivers are called, can receive orders from both male and female clients. “This is a unique milestone for us here in Pakistan and we are excited to be the ones leading the movement,” Junaid Iqbal, Careem general manager, was cited by the Propakistani.pk news website as saying. He added that apart from the employment opportunities, the project breaks “through cultural and social barriers.”

The first female employees in Pakistan welcomed the initiative, emphasizing its importance for them. “Now I can raise my children honorably, I can give my children a good education, ” Zahra Ali told Reuters. Other drivers praised the security provided by the company. Pakistan faces almost 1,000 ‘honor crimes’, as a result of which 1,096 females died in 2015 alone. The country is also ill-famed for a high number of rape cases.

“If an organization is offering security for women … naturally that is very important,” Careem driver, Aasia Abdul Aziz, told Reuters.

People, who have already taken a trip with the newly-joined drivers, shared their experiences on social media. At the same time the project gained support among Twitter users.

Careem is competing for the market in the region with the rival cab-hailing Uber app. The company operates in 27 cities around the Middle East, North Africa and Pakistan.