What is new in the taxi world? Our bilingual “Update” summarizes the news of the last days and hours. We recommend using a website-translator because some links can be in foreign languages.

DTA in Bavaria: From January 1, 2015 patient transportation trips in Bavaria can only be billed in an electronic form, called “DTA”. Because of this, the specialized company “Opta Data” invites those concerned to an information day on October 21.

“It would be very ironical, if the trade union would now, particularly at this moment in time, destroy 25 % of all the taxi-jobs.”

Yes, we can do apps – and a lot more: Said the radio curcuit of the German city of Ulm at the launch of a new taxi-app. They also demonstrated how many other services are connected to the ‘taxi-product.’

Milan Taxis protest Uber: Milan taxi drivers are planning a series of strikes and blockades for the coming Fashion Week to protest against their arch-enemy: Uber and its offshoot, UberPop.

Political argue about Uber in Germany: the debate about Uber has reached the relevant representatives of the German ministries – partly with vastly differing opinions.

An Uber driver is making $3 per hour: “I thought 80 percent of the fares was a very good deal, but in reality Uber was making more money than I was,” an Uber driver says.

Toyota sets stage for test in ride sharing: Grenoble will soon see very futuristic cars for the next generation of urban transportation. 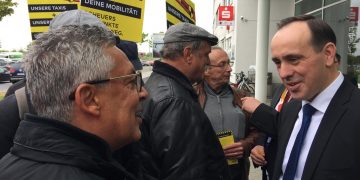