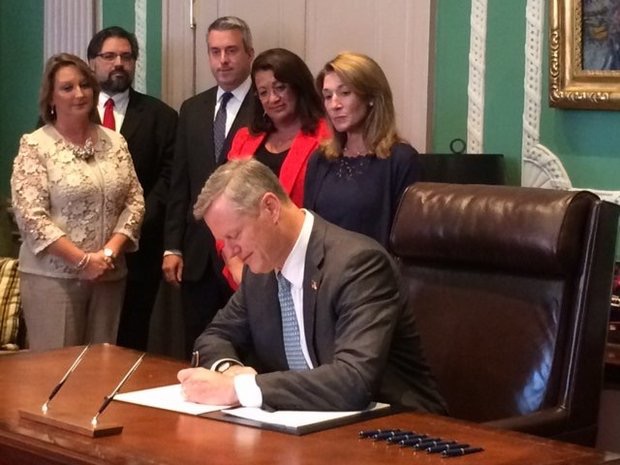 „I think this legislation does a pretty good job of balancing the desire of these transportation networking companies to continue to be able to perform their important work, and at the same time put in place a framework that provides what was missing here in Massachusetts over the course of the past several years, which is a public safety and regulatory framework to deal with some of the very real and important issues associated with both public safety but also vehicle identification and insurance,“ governor Baker said.

Spokesmen for Uber and Lyft told MassLive they welcome the new regulations, which will ensure that ride-sharing services are recognized as legitimate businesses. „We are grateful for Governor Baker’s support and the Legislature’s effort towards creating a framework that embraces an innovative industry that has changed the way the Commonwealth moves,“ said Uber Boston General Manager Chris Taylor in a statement. „We look forward to working with the Administration to implement the law to ensure it increases transportation options and economic growth.“

Adrian Durbin, a spokesman for Lyft, said in a statement, „We applaud Governor Baker for signing this common sense legislation, which sets high safety standards while supporting consumer choice and innovation. Massachusetts residents have made it clear that they want ridesharing, and this new law ensures that transportation network companies like Lyft can continue to grow and expand in the Commonwealth.“

For the For Hire Vehicle industry Scott Solombrino, president and CEO of Dav El/ Boston Coach and a spokesman for Ride Safe Massachusetts, a coalition of chauffeured car and taxi companies, touted the new law as a way to impose regulation on an industry that previously was entirely unregulated. „We think the bill is good for taxis, it’s good for chauffeured car companies. It’s really good for consumers,“ Solombrino said. „Massachusetts now has one of the toughest (transportation network company) laws on the books, and I think it’s going to become a template for other states,“ Solombrino said.

The bill passed Sunday night, on the last day of the legislative session. Baker’s signature was not assured since the bill imposes a 20-cent surcharge per ride on the companies. The fee, which will be eliminated after 10 years, will go toward municipal and state transportation infrastructure and toward a fund handling job training and innovation for taxi and livery services.

Baker, a Republican, has said repeatedly that he does not want to raise taxes or fees. At the same time, he has been open to proposals that he considers to be leveling the playing field between businesses working in the same industry. His administration has raised some fees, such as increasing MBTA fares.

Asked about the fee, Baker said he opposes raising fees to continue doing the same thing, but he does not oppose a new fee to cover the cost of a new program. „We said all along that if the commonwealth is providing a new service, and it’s a service that we believe is an important service, that incorporating a fee to deal with that is perfectly appropriate,“ Baker said.

The new law sets up a two-tiered background check system, one completed by the company and another by the state Department of Public Utilities. Drivers would have to get an inspection of their vehicles, through a mechanism determined by state officials and law enforcement.

The companies would be required to get insurance coverage for their drivers. Any time they are carrying a passenger, drivers must have at least $1 million in liability coverage.

Drivers for ride-sharing services will have to pay the higher commercial toll rates while driving for the company. Unlike earlier versions of the bill, the law does not restrict ride-sharing services from picking up customers at Logan Airport and the Boston Convention and Exhibition Center. That decision will be up to MassPort, the state agency that runs the airport, and the convention center authority. Currently, taxis that operate at Logan Airport have to get badges and undergo additional background checks, so MassPort could impose those same requirements on ride-sharing drivers. Ride-sharing drivers will still not be allowed to pick up passengers who hail them on the street.

Drivers will have to put decals on their cars identifying them as ride-sharing drivers, although they will not need to get the commercial license plates required of taxi drivers. The bill requires ride-sharing drivers to accommodate riders with special needs, without additional charge. It requires them to provide „clear and conspicuous transportation fare estimates“ to customers. It outlines a process companies must follow for keeping records of and reporting incidents.

Boston Police Commissioner William Evans has criticized the bill for not requiring ride-sharing drivers to undergo fingerprinting. According to CBS Boston, Evans said fingerprinting is used to identify people with a history of violent crime or sexual assault.

Baker said the background check standard included in the bill is „the most comprehensive and the most rigorous one in the country. … That’s a heck of a lot better than no standard, which is for all intents and purposes where we were before.“
Solombrino, who pushed for the inclusion of fingerprinting, said he anticipates that a fingerprinting requirement will be introduced as its own bill during next year’s legislative session. „It’s very hard to get everything into one piece of legislation,“ Solombrino said.