How about a nice expensive meal, courtesy of Uber? 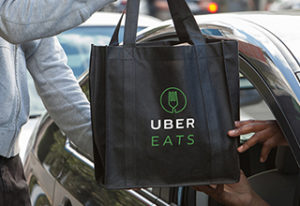 Yes, you could wait for it: surge pricing will not only make your Uber car more expensive, but also the food brought to your door by UberEats. UberEating – That could easily lead to indigestion…

The ride-hailing giant will be charging more if you order during times of high demand while drivers are scarce, CNET reports. Last Thursday Uber announced it would begin to charge extra for deliveries made in certain cities with its UberEATS delivery service, if orders are made during times when demand is high but drivers are scarce. The new pricing model will first come to Phoenix, Houston, Dallas, DC, Miami and Atlanta, an Uber spokesman said.

Uber said customers will be notified of the additional cost immediately, and the exact amount will appear on the menu screen. The exact amount will appear as a separate line item before checkout and on the order receipt too. Uber customers are probably already familiar with the concept of surge pricing, where the company charges more for a ride during peak hours and while fewer drivers are on the road.

The company said the money from extra UberEats charges will go to „incentives for delivery partners“ as well as other operations costs. That means the money will go toward predicting, by looking at past patterns, „where and when there will be high demand and to encourage more people to get on the road in these locations,“ Uber said in a blog post. UberEats operates in 43 cities and earlier this year became a standalone app.