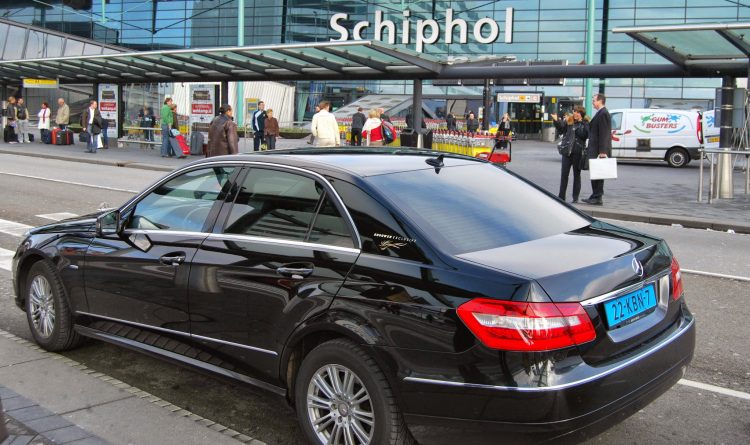 Amsterdam Airport Schiphol used to have a stellar reputation when it comes to an orderly and fair taxi system at Arrivals. And a sustainable one as well: the airport’s three subcontractors between them have 167 Tesla S-type electric taxis.

But British singer Skin, from rock band Skunk Anansie, was not impressed. And neither have many passengers in recent months. Anarchy now describes the situation at the airport better. Skin criticised Schiphol airport for allowing travellers to be ‘harassed’ by taxis touting for business rather than joining the official queue. She has posted a video on Facebook – viewed more than 149,000 times – of ‘official guys fighting dodgy guys’, all trying to persuade people arriving at the airport to take their taxi.

“Now I’ve travelled the world and been to many scary airports but I have to say this is the worst one” she writes in this post. “How does a modern country like Holland with a huge international airport like Amsterdam allow this to happen????!!!”

She adds: ‘These guys in OFFICIAL TAXI vests told me I was waiting in the wrong queue and that another queue was faster, but then as I left my queue, airport security told me that in fact my driver was not official and that they were taking me to the underground garage to meet the actual drivers!”

The latest problems at the airport are a huge embarrassment for one of Europe’s most popular airports. Amsterdam Airport Schiphol told the local paper Het Parool: “We are working with several parties such as the city and the Military Police to address this. The situation has improved, and we have extra guards. But there is a kind of cat-and-mouse game going on. Once the security guards have gone, it starts again.’

Inside the airport travellers already hear alerts that they should travel with official taxis and there are stickers on the floor showing the route to the official queue. The row – unbeknown to the British singer – is not necessarily about unlicensed taxis but it’s a competition between those who bid for the work at Schiphol Airport (three taxi companies) and those who are ‘out of the loop’ – strangely enough both official taxis.

The official ‘Schipholtaxis’ work from an official taxi rank on airport property, but a recent court judgment gave other taxi drivers the chance to ply for hire on the ‘public’ side of the airport. This judgment was in line with the deregulation of the taxi industry in 2000, which gives every official taxi in The Netherlands to ply for hire anywhere in the country.

The latest anarchy has led to situations in which foreign travellers were held hostage in the taxi which took them to Amsterdam and were forced to pay as much as € 500 for a € 40-60 trip. In one case Chinese travelers broke some windows of the taxi in order to escape, when the taxi driver had demanded € 100 for each of their suitcases.

Meanwhile the local municipality has announced “an evaluation before the end of the year”, whereas Sharon Dijksma, Secretary of State at the Ministry of Infrastructure and Environement is threatening ‘harsh measures’.