Nissan has started the production of its second all-electric vehicle (next to the Nissan LEAF) – the e-NV200 – which will be available as both a passenger vehicle, light commercial van and taxi. The Nissan plant in Barcelona will be the global production site for this zero-emission vehicle. Nissan invested € 100 million in the Barcelona plant, as part of a wider € 431 million investment in its Spanish operations. The e-NV200 will initially be exported to around 20 international markets, including Japan. Just as with the Nissan LEAF introduction, the number of markets will grow after the initial launch, to continue the company’s sustained electric vehicle expansion.

Barcelona will be the first city in the world to introduce the e-NV200 as a 100% electric taxi, an initiative Nissan’s Chief Planning
Officer Andy Palmer believes is vital for the city, continuing: “This e-NV200 taxi has renewed significance in the wake of record levels of air pollution in London and Paris. Bringing a significant number of zero emission vehicles to Barcelona‘s streets will ensure cleaner air for every citizen, visitor and tourist, and we‘re confident that forward-thinking councils everywhere will be clamoring to bring these benefits to their municipalities in the coming years.“

For the Mayor of Barcelona, the start of production of new all-electric van and the partnership between Nissan and Barcelona “is part of a strategy in Barcelona and its metropolitan area in order to consolidate Barcelona as the centre of a new urban economy model, based on innovation, technology and sustainability. In our city, we are strategically targeting sectors that are essential for the future, and electric vehicles are one of them.” 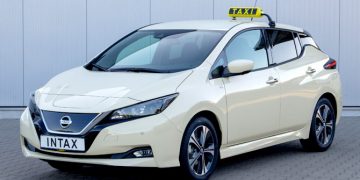