Its name: Uber. Good for many puns in the German language: ‘over’, ‘about’ or…above. Like in ‘above the law’… But this issue is far too serious for word games. Especially as Uber extended its offer with UberPOP to provide ‘taxi services’ with unlicensed drivers.
That a technical innovation facilitates a rapid contact between customer and driver, does not justify bypassing the legal provisions for customer protection. Many regulators have grave reservations Grouwels banned it as illegal, she was sneered at in a tweet by EU IT-Commisioner Smit-Kroes: “Why support taxi cartels? Make Uber welcome in Brussels!” Unhindered by any critical reflection, she joined forces with the clever Uber lobbyists.
As former Minister in a strictly regulated taxi market, she went after illegal taxis. That she now supports the same illegal cabs (as Uber-POP), is unforgivable. Why not mention all the innovative taxi apps developed by the taxi industry well before Uber? Selfpromotion is –unfortunately- not the taxi trade’s forte.
The difference between Uber and other apps is its astronomical bank-account, the app’s slick design and the ‘buzz’ around it. Sometimes Uber looks more like a fashion accessory than a taxi app.

We’re contributing to that buzz – unintentionally. By writing about it. Uber employs a worldwide army of highly paid lobbyists and purposely seeks illegality with some of its products – stoking the debate. Its crossing of legal boundaries drives the taxi trade and many regulators to distraction. Why? Because Uber knowingly breaks the regulatory rules with Uber-POP/UberX.
Should the customer have to choose between Uber’s cheaper and illegal hitchhiking service and a professional trained taxi
driver with his properly insured, safe and properly maintained taxi operated in a wellregulated environment
with proper consumer protection? No.
Uber prefers being ‘disruptive’. To provoke and force new legislation. Nothing wrong with a thorough rethink of the taxi market.
Especially since Uber, with most products and in most places, works (almost) within the law.

Uber often blames the taxi industry for being constricted by regulation. And for defending licence value. All (partly) true. Just like quality and innovation are sometimes missing from the trade. There is a great demand for attractive, more affordable and innovative taxi services. Why not compete within the law on a level playing field, Uber? Afraid to lose from seasoned, safe and well-regulated providers?
Jürgen Hartmann and Wim Faber
Managing Directors Taxi Times 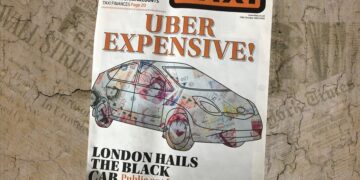