Taxi drivers in Catalonia mobilize against Uber and Cabify 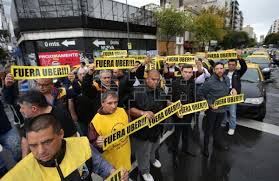 CAN reports that the increasing number of licenses for “rental cars with chauffeur” caused strikes and demonstrations by hundreds of officially-licensed taxi drivers in several Catalan cities on Wednesday last week. According to representatives of the taxi transport sector, these licenses, also known as VTC, open a legal loophole for the unregulated activity of transport services through mobile apps like Uber or Cabify.

In Barcelona almost a thousand taxi drivers marched through the city center to the Delegation of the Spanish Government, blocking traffic in the very heart of the Catalan capital, to demand a solution for the sector. Representatives of several taxi driver unions met with the Deputy Representative of the Spanish Government in Catalonia, Emilio Ablanedo, and asked him to communicate their demand for regulation of new mobile platforms to the Spanish Ministry of Public Works.

Ivan Sesma, spokesperson for the Elite taxi driver union, complained that the alternative mobile app services were taking advantage of the situation even during the strike on Wednesday morning, charging double for a ride to the Barcelona airport. Sesma said that it was unfair that regular taxi drivers are obliged to pay taxes and follow regulations while new mobile platforms are neither regulated nor taxed.

Sesma highlighted the sector’s unity in this matter, illustrated by the congress of more than 60 taxi driver associations at the beginning of the month to plan common actions against this “unfair competition”. He also thanked the Barcelona city council and the Catalan Government for their support. Rosa Díaz from the local taxi association Taxi Companys said: “Our clients are taxi passengers. The clients of the companies behind the new mobile app platforms are investment companies on the stock market.”

Other Catalan and Spanish cities also saw their city centers collapsed on Wednesday. In Tarragona around 200 taxi drivers blocked one of the major city squares, the Plaça Imperial Tarracó. They also accused mobile app services like Uber and Cabify of taking advantage of the legal loophole for licenses for rental cars with chauffeurs in order to offer ‘de facto’ taxi services. Sergi Marquès, president of the Tarragona Taxi Network Association, complained about the fact that his group “offers clean cars and a service where rates and activity are strictly regulated” while “foreign ‘lobbies’ destroy” their sector. wf