Taxis went on strike across Italy over Uber benefits 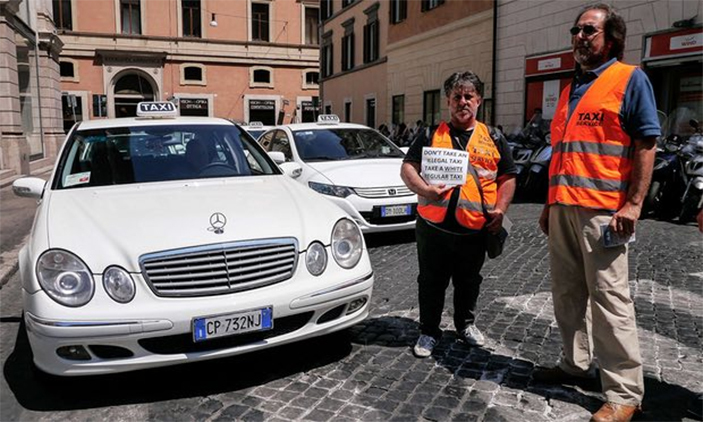 Last Thursday’s taxi strike in Italy was a success, measured in participation, writes The Local. Taxi drivers were striking between 8am and 10pm on Thursday as part of an ongoing row over perceived perks for non-official car hire services.

The strike, announced a week earlier, followed six days of unofficial strike action at the end of February, which led to violent protests outside parliament. Although not all taxi unions signed up to the strike, taxi services in Italy’s big cities have been left severely depleted by it, including services to and from airports. According to the leader of Uritaxi, a union which was not taking part in the industrial action, many drivers weren’t working on Thursday due to „fear of retaliation“ from other drivers.

At affected airports, additional staff were on hand to advise travellers, and in Rome, replacement bus services were taking visitors to and from the airports.

In the capital, taxi drivers marched from the Colosseum to the central Piazza Madonna di Loreto, where union representatives reported on the ongoing talks with the government. Similar protests took place in Milan, Naples, Genoa, and Turin.

Rome mayor Virginia Raggi, who has expressed support for the drivers and criticized government reforms „imposed from the top down“, reminded taxi drivers that they were „the first ambassadors of our capital“. She called on those protesting to guarantee a minimum level of service and avoid any incidents which could damage the city’s image. „We understand the difficulty of the situation and their reasons, but the capital, particularly ahead of the celebration of the 60th anniversary of the Treaty of Rome, is in the spotlight of the world,“ noted Raggi.

The row is over government regulation of car-hire and car-share services, which taxi drivers claim benefit from rules regarding tariffs and licenses. Currently, Uber or NCC drivers can purchase their licenses in smaller towns, where they cost less, but use them to work in cities, something taxi drivers are unable to do. Private car hire drivers are also able to charge as much as they like, compared to taxi drivers who are limited to fixed tariffs. wf