The first electric water taxi in Europe sailing in Rotterdam 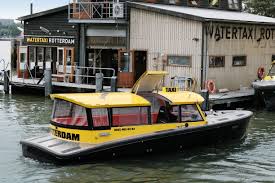 The Rotterdam Water Taxi has expanded its fleet with a sixteenth, unique boat: the first electrically powered water taxi of Europe. The Plug-In Hybrid Water taxi, in short PHW was baptised on August 3 in the presence of alderman Pex Langenberg (Mobility, Sustainability and Culture) and officially went into service. The baptism was performed by Mrs Karin Knapp.

The new water taxi can carry 12 passengers with a maximum speed of 25 km/h and will be deployed on short routes in the center of Rotterdam area. The PHW is equipped with an energy-efficient, diesel-electric propulsion.

The Deep Blue plug-in hybrid system (50kW) for the larger recreational and small commercial vessels was developed by the German company Torqeedo that already is making progress since 2004 with cleantech for boats. The PHW is quiet, has a minimum of CO2 and NOx emissions and is 70 percent more efficient in its energy use than the fossil fuels used by water taxis. The PHW thus fits seamlessly into the sustainability objectives of the Rotterdam city council. The development of this environmentally friendly prototype took two years to complete and was funded through a grant from the European Regional Development Fund (ERDF).

„We are delighted that Watertaxi Rotterdam has chosen our Deep Blue Hybrid system to power the most of their famous yellow water taxis,“ said Christian Pho Duc, senior vice president of sales Torqeedo. „The cooperation from the beginning went very well, and the newly designed boat gets the best out of our highly efficient hybrid drive system.”