The Irish pub that comes with a 1955 Beardmore Taxi 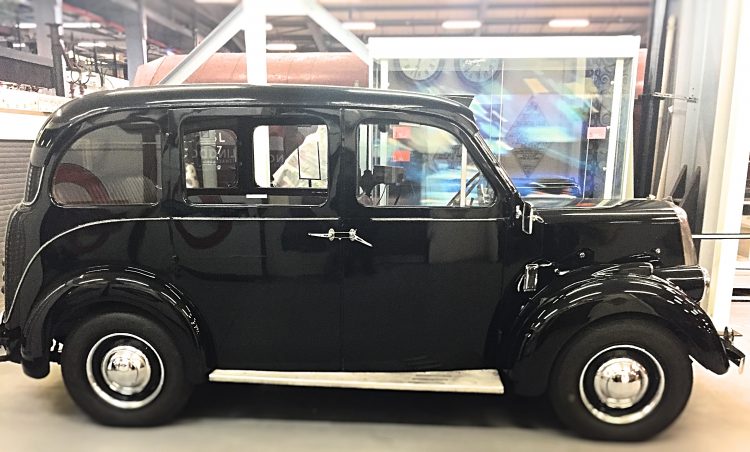 Mary Anne Graham is a retired teacher and Tony Graham is “recovering” lawyer. Together, they own and operate Pattersons’s Irish Pub in Mendocino, writes SFGate.com. They would love to take you on a spin around the block in their 1955 Beardmore Taxi.

Owning a traditional Irish pub requires some degree of authenticity, hence it was our duty to collect an original London taxi and an iconic red phone booth to go with your pint of Guinness. Our 1955 Beardmore London taxi has quite a history. William Beardmore was a Scottish shipbuilder in the 1900s who also had his hand in locomotives, motorcycles and fine motorcars. His London taxi was known as the “Rolls Royce of Taxi Cabs.”

In order to avoid tax issues, it was originally considered a farm vehicle, so the outside luggage compartment was designed to fit a bale of hay. Now it fits a compliment of luggage. The taxi is made from a hodge-podge of materials. It has an aluminum body, fiberglass fenders and an ash wood frame.

Incredibly, I found the Beardmore in Fort Bragg. An elderly gentleman had it in his garage for 20 years, and would drive it on Sundays to brunch. Due to failing health he sold it to me. It has been in the driveway of the pub since 2000. Originally it had a 2-litre diesel engine and a 3-speed manual transmission with probably about a million miles on it. It was easily replaceable with a Ford Falcon 4-banger and an automatic transmission.

Taking a ride in this taxi is an attraction in itself. One of the things that makes this car so fun to drive is that it literally “turns on a dime” in order to navigate the narrow London streets. With the steering wheel cranked over, it will make a U-turn on the rear wheels. Try that in your SUV.

The passenger area is amazing. It easily holds six passengers, with headroom to accommodate your felt top hat. Trimmed in red leather and chestnut, it is truly a trip back in time. The signage telling you to “mind your head” and to “watch the gap” is so fun. San Francisco taxis have a major flaw – you cannot tell when they are “for hire” or “not for hire.” This taxi has lighted signage that tells you both.

Sorry, but the Beardmore is not Wi-Fi enabled. In Mendocino you are lucky if you get one bar. It doesn’t have a stereo either, but there is a boom box so you can bring your own retro cassette tapes. Although a classic collector’s vehicle, the Beardmore is not in great demand and would probably fetch only $10K if in excellent condition. We bought it and restored it for purely sentimental reasons, not as an investment.

Besides, the Beardmore looks great next to our red London phone booth, which is a story in itself. These phone booths are a national treasure in the UK and are no longer available for export. They are made of iron and weigh one ton.

The Beardmore spent its working life mostly in the City of Liverpool. From what we were told it even carried the Beatles to Abbey Road, and was also hired out for many weddings and movies. In 1987 the Beardmore won an award for the Best Vintage London Cab.