This is how the new Passat drives: Volkswagen has introduced the eighth generation of its Passat and we have found first reports and photos in the Internet.

Uber snaps up Lyft COO: In the future, Travor VanderZanden will be responsible for the division International Growth at Uber. The former COO of Lyft left the competitor in August due to different opinions with the management.

„He died a martyr“: Relatives and friends said goodbye to Alan. The Minicab driver had been beheaded by the IS.

Technology takes the wheel: The New York Times provides us with an interesting overview of the latest developments in the world of autonomous vehicles.

Environmental award for taxi company: The Munich taxi centre Ostbahnhof was awarded the Green Fleet Award 2015 of the TÜV Süd. 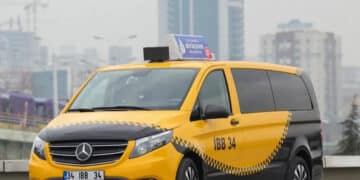