100.000 Euro fine for Uber: Due to fraudulent activities, a French court has convicted the US-chauffeur service.

the news in francais: http://www.boursier.com/actualites/economie/vtc-uber-france-condamne-a-100-000-euros-d-amende-25692.html

Disputes and strikes about the amount of the increase: Everywhere in Germany the taxi industry is calling for a tarif increase by about 25 percent, for only in this way can the increased costs be offset by the introduction of the minimum wage in 2015. However, many communities want to increase only up to 15%. In Hanover, therefore they decided NOT to strike for the missing 10%.

„With us, you are the star – We take you comfortably and safely to the theatre and then back home!“

Advertising at the back of each theatre-ticket. The radio circuit Hanover promotes theatre taxis.

Please keep the cowboys to films: A German journalist explained in the NY Times, why Google Uber & Co are facing such opposition in Germany.

Electric taxis in Rome: The two first electric taxis in the Italian capital come from Nissan: The taxi fleet 3570 is using two Leafs. The peculiarity of this story: Together with FCS Mobility a Nissan NV400 was converted into a rolling charging station for electric taxis.

England relies on hydrogen: The British government has announced a grant of 11 million pounds for H2 fueling stations and vehicles. The commitment of the English is no coincidence: Toyota had recently decided to sell initially in the UK the production-ready hydrogen vehicle as of 2015.

There’s a car that had slipped off the radar: Paul Horrell drives the new Ford Mondeo for BBC Top Gear. 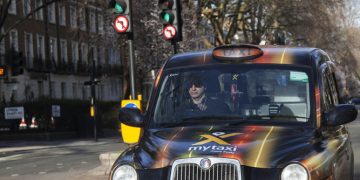