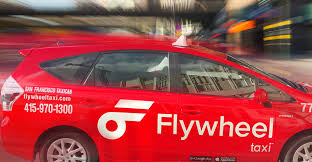 A San Francisco taxi operator, desperate to protect a troubled industry’s turf, is trying to tighten the rules for Uber Technologies Inc. and Lyft Inc. in their hometown, writes Bloomberg. In a struggle playing out across the U.S. and in Europe, traditional cab companies have gone to court complaining they’re at a grave disadvantage because upstart ride-hailing services got a pass from regulators.

With the number of San Francisco licensed taxis at 1,800 and shrinking, compared with 45,000 drivers working mostly for Uber and Lyft, Flywheel Taxi is asking a federal judge to flatten what it calls an “unlevel and unequal field.” Similar fights are under way in New York, Boston and Philadelphia, while a Chicago federal appeals court in October thew out a challenge by a local taxi lobbying group.

Flywheel, a 2011 reinvention of Desoto Cab Co., claims to be the first app-oriented taxi fleet. Calling itself San Francisco’s oldest and biggest taxi service, Flywheel argues it was hobbled by a state regulator’s 2013 decision to usurp regulation of ride-hailing companies from the city.

It contends that by creating a new category to classify Uber and Lyft as transportation network companies, or TNCs, the California Public Utilities Commission (CPUC) allowed them to “operate free from the rules and regulations that govern all other taxi companies in San Francisco, and without incurring the associated costs of complying with local rules and regulations,” according to a court filing.

„Uber and Lyft got their foot in the door, then it was swung wide open by the CPUC,“ Flywheel President Hansu Kim said in an interview. Looser regulations under the TNC classification allowed drivers for the ride-hailing platforms to flood San Francisco’s streets, he said. „Essentially anyone with a car can act as a taxi and sell rides.“

Seeking to undo the 2013 decision, Kim says Flywheel’s costs amount to as much as $9 million annually for medallions, permits and registration, along with liability insurance to cover $1 million per incident and workers’ compensation insurance for all drivers.

Taxi cabs must also meet fuel efficiency and clean-air standards, and taxi drivers must be commercially trained, licensed and screened with background checks. While their companies must comply with price controls, Uber profits from raising fares during peak demand, according to the court filing.

The CPUC last Thursday asked U.S. District Judge Edward Chen in San Francisco to throw out the case. Chen has already ruled against Uber in other cases involving its disruption of the transportation-for-hire business, allowing its drivers to sue as a group to seek some employee benefits despite the company designating them as independent contractors.

Matt Kallman, an Uber spokesman, and Lyft spokeswoman Chelsea Harrison declined to comment on the taxi case. Jonathan Koltz, a lawyer for the CPUC, said taxis continue to enjoy at least one important edge over Uber and Lyft: they can pick up passengers hailing them from the street.

Flywheel argues that Uber and Lyft perform the same function of taxis but benefit from lighter regulation, in violation of the constitution’s guarantee of equal protection under the law. To make that case, Flywheel has to demonstrate the ride-share companies are similar to taxis. Flywheel has an unlikely ally in its fight — its regulator, the San Francisco Municipal Transportation Authority. While the agency isn’t directly involved in the lawsuit, it issued comments urging the CPUC to revisit its regulation of ride-sharing companies. Its concerns echo some of Flywheel’s.

“These are drivers operating commercially on our streets“ with “very limited regulation and almost zero enforcement,“ Kate Toran, head of taxi regulation for the municipal agency, said in an interview.

If Flywheel loses the battle with the CPUC, it still has another fight. It has sued Uber directly in the same court over claims the startup relied on billions of dollars in funding to drive competitors out of business through predatory pricing. Uber hasn’t filed a response yet.

„Uber and Lyft are taking their mounds of money, of venture capital, to destroy the taxi market by subsidizing rides,“ Kim said.