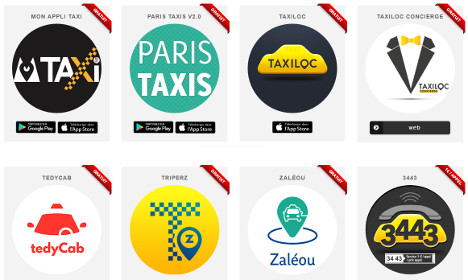 The French government launched several taxi apps two weeks ago in a bid to challenge the popularity of Uber. It launched the „Le Taxi“ platform of apps which allow users to book a cab using the internet and with geo-localisation. Unlike Uber, users of the eight official apps (more on this below) can actually choose their drivers based on their proximity and their previous ratings.

The new apps come as a result of the Thévenoud Law from last October, in an attempt to resolve conflict between private minicabs and France’s cabbies. Users of Le Taxi apps can now „e-hail“ a cab in six cities – Montpellier, Marseille, Aix-en-Provence, Paris, Rennes, and La Rochelle – with Lyon and Niort soon to follow. After the ride, passengers can rate their experience so other users know what to expect.

There are a total of eight new apps for customers that have been rolled out, all based on a similar premise. Sound familiar? Of course it does – this is just how it works with Uber, the main competitor to French taxis in a battle that has seen violent protests across the country from cab drivers who are furious to be losing business to the California-based company.

The government believes that the Le Taxi is the solution, and that its apps can outpace Uber thanks to the sheer number of potential drivers who can sign up. At the launch Transport Minister Alain Vidalies called it „the next level when it comes to the modernization of the taxi profession“. However, several French newspapers have trialed the new apps and found them somewhat lacking when compared with Uber.

Some, for example, did not allow direct debits as Uber does, meaning passengers have to ensure they have cash or card with them. Some wouldn’t allow a third party to organize a ride – in other words, the taxi picks up whoever is holding the phone.

And some were unable to provide fare estimations as Uber does.

However, the government seems confident that the sheer number of taxi drivers in France will be enough to make the apps popular. It has signed up some 7,000 of the nation’s 57,000 cab drivers and aims for around 50,000. But it remains unclear exactly how many taxi passengers will use the service.