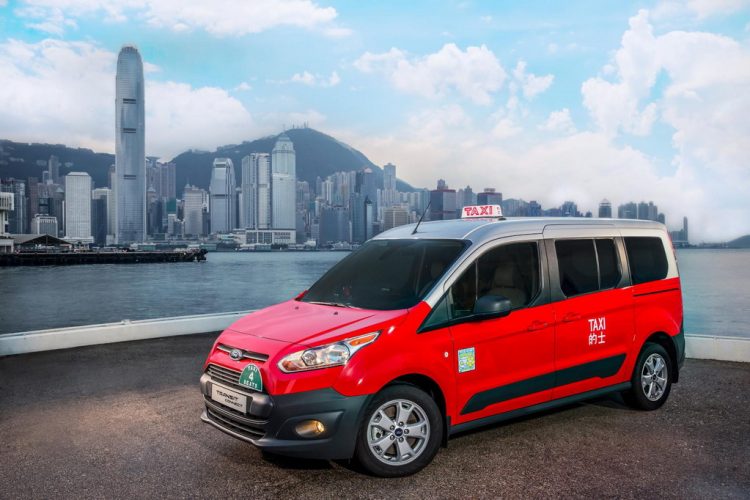 According to the South China Morning Post sixty more premium taxis will offer customers a smoother ride as industry players step up efforts to revive the city’s tarnished cab trade. By gradually upgrading the quality of service, they hope the government will back down on its controversial plan to introduce 600 premium cabs under a franchise scheme that will charge higher fares.

Taxi operator Chow Kwok-keung has partnered with Future Motors to launch the service, called Jumbo Taxi. The Ford Transit Connect vehicles, which cost HK$250,000 each and run on LPG, provide a spacious interior and extra-large cargo space that can hold nine pieces of luggage. There is free Wi-fi and a mobile phone charging service for passengers. A monitoring device will deter drivers from taking longer routes or slipping into bad habits, such as speeding or hitting the brakes on and off.

A complaints mechanism has been set up to resolve any disputes that might arise, with compensation for offended customers. “Jumbo Taxi currently has some 40 premium taxis on the road with the number reaching 60 by the end of this month. We aim to expand the number to 100 early next year with a more comfortable, convenient and safe service for Hong Kong,” Chow said.

Another upmarket player, SynCab, already has 74 vehicles on the road and aims to add 40 more early next month. Diamond Cab operates seven taxis for wheelchair users and PrimeCab Hong Kong has more than 10 vehicles.

Over the past decade, the volume of cab usage in the city has dropped from 1.3 million daily trips to 1 million amid complaints of bad service. Operators are also struggling with rising costs and stiffer competition with the expansion of the MTR network and the ride-sharing service Uber.

There were 2,590 complaints against taxi services from April 1 to the end of June this year, a rise of 18.4 per cent compared with the previous quarter, according to the Transport Complaints Unit.

The trade is also struggling to recruit taxi drivers, with young people put off by the trade’s bad reputation and poor career prospects.

SynCab director Sonia Cheng Man-yee said she welcomed new players who would raise the quality of the taxi trade and boost the morale of cabbies. “I hope the government will change its mind about the franchise premium taxi scheme,” she said.

Passengers can flag the metered premium taxis on the street. Jumbo Taxi has a booking fee of HK$50 via its hotline, 5711 1222, while SynCab imposes a surcharge of HK$30 to HK$80. Jumbo Taxi does not provide wheelchair access as it aims to target corporate clients and business travellers. “Apart from serving Hongkongers, we hope to provide hotel pick-ups and a corporate limousine service on a monthly payment basis,” Chow said, adding that he also hoped to offer customers an electronic payment method.