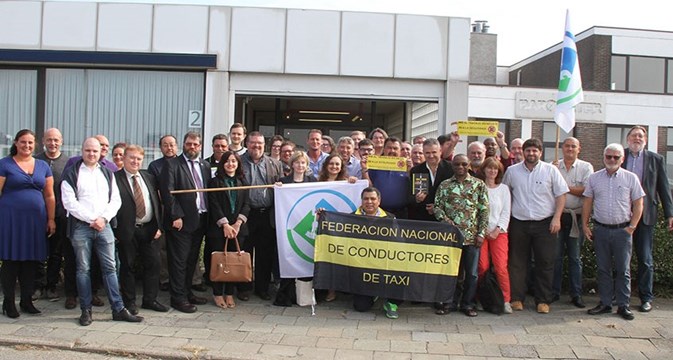 Trade unionists from around the world explored a common ITF approach to tackling the Uber business model of “deregulation, destabilisation and disrespect for workers”, which is increasingly prevalent in the taxi and other transport sectors.

The second ITF Uber meeting in Antwerp, Belgium on 20 and 21 September attracted 37 trade unionists from 19 countries, including North America, South America, South Africa and those in Europe. They were joined by the International Road Transport Union (IRU) and a member of the European Parliament.

Frank Moreels, president of BTB in Belgium and vice-chair of the ITF’s road transport section, said that Uber and other app-based models promoted themselves to passengers as innovative “but are based on deregulation, destabilisation, disrespect for workers, ignoring legislation, not paying taxes or contributing to social security”.

He continued: “Uber acts like a ‘hidden’ employer. Communicating with clients and workers by mail, text… Uber drivers are selected and fired by e-mail, contracts are signed electronically.

“But traditional taxi operators needed to up their own game in terms of respecting their drivers and innovating to meet passengers’ expectations, if they are to meet the challenges of the Uber business model.”

The participants shared their experiences of wins against Uber in cities such as Austin, Texas in the USA; Brussels, Belgium; Buenos Aires, Argentina; and Copenhagen, Denmark.  But they agreed that Uber could influence politicians to find other ways to re-enter cities it had been banned in, and agreed that information-sharing was essential in following the company’s global development.

Bhairavi Desai from the New York Taxi Workers’ Alliance commented that it was vital to make workers’ voices central in the economic clashes in the taxi industry and to win the trust of taxi workers to develop union campaigns. Unions needed to share global strategies based on universal principles to protect workers against the predatory ‘Ubernomics’ business model, which was destroying full time work and replacing it with ‘sub-minimum poverty gigs’. (more in November’s Taxi Times magazine).