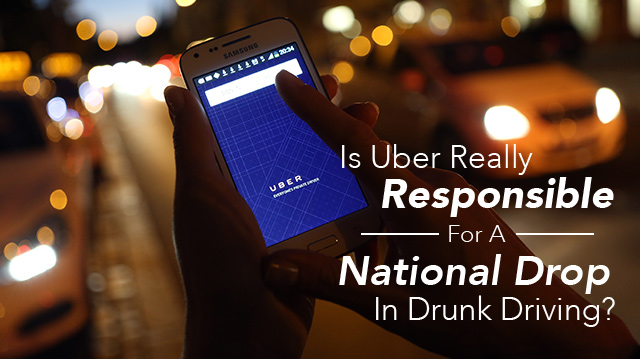 In recent years, driving under the influence arrests (DUI) in Los Angeles County have decreased. In 2013 the number of DUI arrests decreased 10 percent compared with the previous year; in 2014 the decline was 14 percent, Wendy Brewer of the „Avoid the 100“ task force, which represents about 100 law enforcement agencies in the county, told LA Weekly.

Uber has stated that „a city with Uber has … fewer drunk drivers on the streets.“ And Steve DelBianco, executive director of tech-industry trade group NetChoice, told us in 2014 that „the data seem to support our expectation that Lyft and Uber reduce DUIs.“

Makes sense. But a new study by USC and Oxford University researchers says not so fast. „Our findings reveal that the deployment of Uber services in a given metropolitan county had no association with the number of subsequent traffic fatalities, whether measured in aggregate or specific to drunk driving–related fatalities or fatalities that occurred on weekends and holidays,“ the study, published recently in the American Journal of Epidemiology concludes.

The researchers say the only other legitimate paper on the relationship between ride-share use and drunk driving is flawed because it focused only on California and because of the „possibility that confounding factors influenced the results,“ the USC-Oxford study states. „The presence of Uber … had no statistically significant association“ with a reduction in driving fatalities in the United States, the study’s authors write. In fact, „The presence of Uber was associated with a 2.0 percent … increase in traffic fatalities among all drivers.“

This, of course, makes no sense to many of us who have piled into the back of a stranger’s car at 2 in the morning. Here’s the study’s explanation: First, because drivers are unlikely to get caught drinking and driving, paying for a ride-share service may still be far more costly than driving drunk for many individuals. Second, individuals inclined to drink and drive may not be very rational. Third, although Uber’s growth in terms of markets and drivers has been unprecedented, the number of Uber drivers in a market may still be too small to have much of an influence on the 121 million incidents of drunk driving that take place each year in the United States.

The main thing is that you get home safely. So act locally, whip out your phone and get that ride.