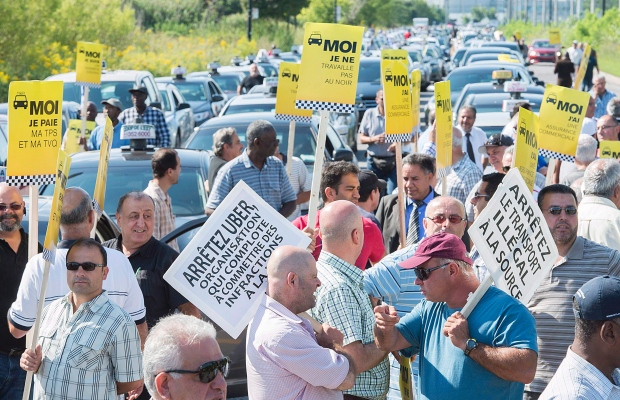 While the Quebec transport minister says the agreement struck with Uber is fair for all parties, taxi drivers told CBC they are furious about the deal they say amounts to a betrayal. The agreement sparked a protest outside the Transport Ministry’s offices in Quebec City, and taxi drivers are threatening to block the Quebec bridge.

From last Thursday, Uber drivers don’t have to hold the same permits as taxi drivers, which can cost thousands of dollars. Quebec transport minister Laurent Lessard pointed out that when taxi permits were first given out, they were free. Their value exploded when permits stopped being issued, he said.

As an attempt to address that, each time someone uses Uber, the company will pay a flat fee to the government, which will go into a fund to help modernize the traditional taxi industry. It’s not yet known how much that fee will be. Lessard said he will make the details public once they are finalized, but could not say when that would be. In the US state of Massachusetts government adopted a similar policy.

A group representing taxi dispatchers told CBC the government promised the value of taxi permits would not be affected and that all drivers would be treated equally, but that its members feel „betrayed.“ „Today I realize that being patient and following the rules does not pay in Quebec. Here, the government kneels before rogue multinational companies instead of respecting its citizens,“ spokesperson Abdallah Homsy said in a statement.

Under the new deal, Uber drivers‘ hours will be limited and Uber will pay additional penalties if it goes over a certain number of rides per week. But like taxi drivers, Uber drivers will have to undergo background checks, have their vehicles inspected and the company will have to pay all applicable taxes to the government. They will also be required to hold a class of driver’s licence reserved for taxi drivers.

In a statement, Uber general manager Jean-Nicolas Guillemette said the company is still evaluating its ability to offer „quality service to riders and drivers“ under these new rules, but felt it was important to continue operating in Quebec. „We want to demonstrate that we’re ready to work in a regulated industry and be a partner in innovation,“ he said.

Full details of the deal may not have been revealed yet, but for daily Uber user Josh Trager, the agreement is a relief. ‚If we were to lose Uber, it would almost be like the internet breaking.‘ – Uber user Josh Trager, who is legally blind  Trager relies on Uber since the application allows him to zoom in and easily contact a driver. „It changed my life,“ he said. „I was able to get around.“

He says Uber allows him to be independent, and he uses the application on a daily basis. „I feel like now being accustomed to Uber. If we were to lose Uber, it would almost be like the internet breaking.“

Alexandre Taillefer, founder of Téo Taxi, an electric cab fleet launched last year, said the success of Uber in this province opened eyes to the fact that consumers were looking for change in the industry. But he added that the company displayed what he called an „incredible arrogance“ when it first set up here. He told CBC he is pleased the agreement creates a set of rules for everyone to follow. „When Uber offers rides for 25 per cent off, that’s easy to do when you don’t have the taxes and permits to pay for,“ he said.