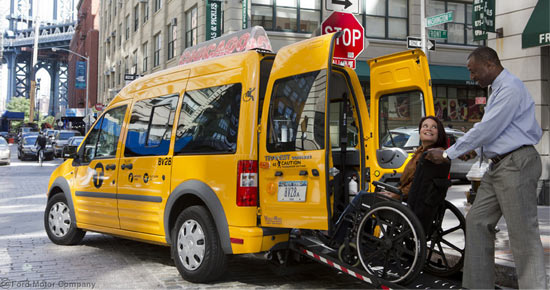 Transporting people with mobility handicaps is not a task New York City carries out easily. The city’s system, Access-a-Ride, uses clapped out vehicles and doesn’t manage to dispatch its small fleet efficiently. The taxi operators, half whose fleets will have to be wheelchair-accessible by 2020, are worried the city is trying to save money by giving this lucrative contract to Uber or Lyft. Green and yellow taxis are hoping the public transport authority MTA isn’t persuaded that e-hail apps could do a better job than Access-a-Ride contractors, writes Crain’s New York Business.

Taxi owners in New York are looking with trepidation at a pilot program that launched last month in Boston to give archrivals Uber and Lyft access to the lucrative, government-subsidized business of shuttling around disabled passengers. Taxi interests fret that the Metropolitan Transportation Authority (MTA) could implement a similar program here if persuaded that the e-hail competitors can do a better job, at lower cost, than existing Access-a-Ride contractors.

Access-a-Ride vans, which serve the disabled, the mobility-impaired and the elderly, are often late, must be booked a day in advance and, at roughly $70 per completed ride, cost the state agency nearly $500 million per year. To save money, the MTA has already shifted passengers to smaller, less costly cars and MV-1 wheelchair-accessible sport-utility vehicles. And it has also tried giving riders, many of whom do not use a wheelchair, fare cards that they can use with taxis.

But shifting riders to e-hail apps could reduce waits for pickups as well as costs. Medallion owners and their allies in the disability community, however, want to see wheelchair-accessible green and yellow cabs, which can now be hailed through apps such as Curb and Arro, to be the solution, not Uber and Lyft.

“Taxi service has the same ability to provide e-hail accessibility,” said Allen Weingarten, a second-generation yellow cab operator and co-owner of Taxifleet Management. He pointed out that taxi owners are working to make the citywide fleet 50% wheelchair accessible by 2020, while Uber and Lyft have historically had no cars on their platforms for wheelchair users. “We will have the ability to service the population of disabled New Yorkers without including companies that discriminate against the disabled,” he said.

The MTA has not announced any kind of partnership with rideshare companies for its paratransit program. But it could be leaning toward one. “With the rise of the e-hail market, we, like other transit agencies, are also looking at how that market may be useful,” an MTA spokesman said. And in a letter in May to a prominent disability activist, an MTA official noted that the agency was “working closely” with accessible cabs, as well as Uber, to expand service beyond Access-a-Ride vehicles.

“We believe that successful deployment of e-hail apps is key,” wrote MTA Senior Vice President Darryl Irick. Uber and Lyft would not need to provide accessible cars to play a role in the service, because about half of all rides in the paratransit program are taken by ambulatory passengers. Disability activists have both practical and symbolic reasons for their opposition to Uber and Lyft. The principled part of their argument is that rideshare services discriminate against the disabled by not providing cars that accommodate wheelchairs.

“To me, giving a contract to companies that refuse to take people in wheelchairs is ludicrous,” said James Weisman, chief executive of the United Spinal Association advocacy group. “If they refused to take black people in their cars, the MTA wouldn’t even consider giving them a contract.”

On the practical side, the advocates see a need to support green and yellow cab owners. While the taxi industry is shouldering nearly all the burden of providing unsubsidized accessible service, it is being battered by Uber, which has much looser requirements.

“It’s clear the taxi industry is shrinking, and it’s shrinking because of its inaccessible competitors, Uber and Lyft,” Weisman said, noting that accessible cabs are more expensive to operate and less popular with drivers. “That means there will be fewer accessible vehicles than everybody figured we would have [by 2020].”

Uber maintains that it is helping the disabled. In the outer boroughs, its app connects riders to wheelchair-accessible green cabs—a particularly helpful service, as the Taxi and Limousine Commission has yet to launch a citywide dispatch system for accessible cabs. In Manhattan, the company recently took accessible yellow cabs off its app and launched a pilot program with accessible cars.

“Uber has helped make the accessible-taxi system work, allowing New Yorkers with disabilities to push a button and get a ride within minutes,” a company spokesman said in a statement. “Uber has been commended for increasing the freedom, flexibility,and mobility of riders and drivers with disabilities.”