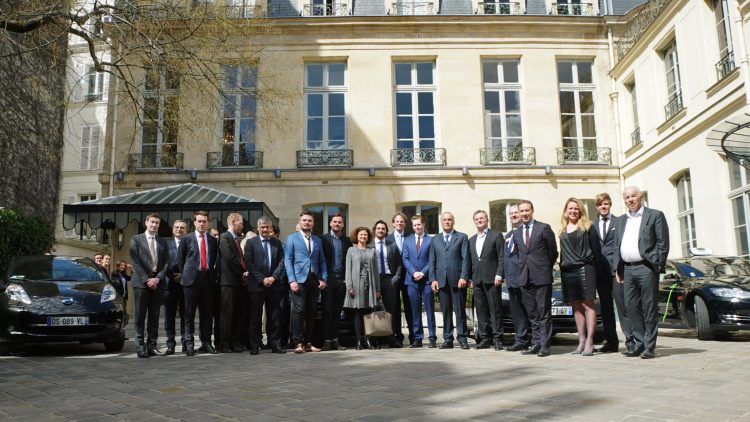 Yesterday almost all of the 14 taxi companies who launched the climate initiative Taxis4SmartCities just before last years’ UN Conference on Climate Change – COP21), put their signatures on the document sealing their cooperation in a festive (re)launch. Originally the launch was planned to coincide with COP21 in Paris, and with more visible activities, but the terrorist attacks and the authorities put a stop to that. Today representatives from taxi companies of 10 European countries held their first working meeting and launched the initiative at a busy press conference. And they also posed in front of the ubiquitous Tesla taxis.

Yann Ricordel, CEO of Paris radio-circuit Taxis Bleus, who took the initiative last year to invite his European colleagues to join his climate initiative, was happy to announce that “the taxi sector is ready to be a pioneer in the reduction of greenhouse gases. We are a modern, innovative and also very ambitious trade and we would like to see tomorrow’s taxi as an environmentally friendly form of transportation.”

“Cities all around the world aim at reducing CO2 pollution and this cannot be done without the taxi industry, which has its workplace in the city centre. We are happy to work with our local governments and are also aiming at sharing our findings with them as our taxi initiative takes shape.”

Sylvie Lemmet, speaking for the French Environment Ministry underlined the important role transport played during the last climate conference COP21: “Many initiatives for coalitions have been launched during COP21 and Taxis4SmartCities was one of them. We need these coalitions to reach our goal of a maximum of 1,5 degree rise in temperature. That means 20% of vehicles need to be electric in 2030. Here in France we support the industry in renewing their fleets and we need to greatly increase the number of charging points in the whole of France. This way we are all working towards reaching the goals for the next COP in Marrakech.” The taxi initiative will definitely find a place on the agenda of the climate pre-summit in Washington in May 2017.