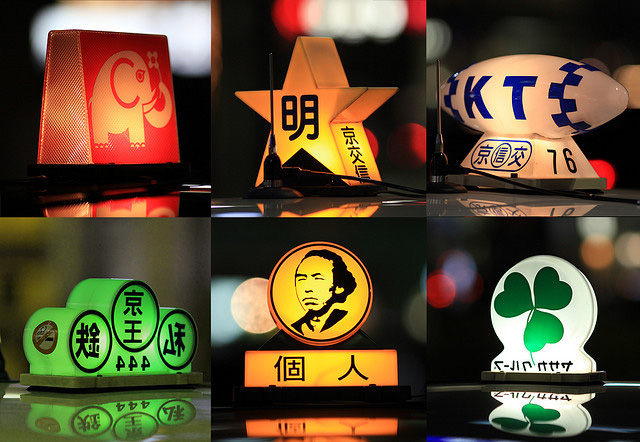 No more neon puppies, cherry blossoms, frogs, and lucky cats on Tokyo taxis? Many special signs which were snapped for the 2012 book Tokyo Taxi have already disappeared writes Atlas Obscura in an interesting view of Tokyo’s taxi trade and photographer Alexander James.

If you raise an arm in the neon-soaked streets of Tokyo, a taxi—or takushi—will begin a series of majestic maneuvers. The vehicle will exit the steady stream of traffic, and glide towards you. Before the car has stopped, the door will begin to open as if by magic. It almost clips your thigh, but it’s executed with such skill that all you need to do is turn your hips and slide in the pristine backseat of the cab. While you zoom off to your destination, you become part of Tokyo’s opulence—the radiant roof sign and reflective surface of the cab contributing to the illuminated city.

“The driver is a ballerina with a Toyota Crown at his disposal,” says English artist and photographer Alexander James. As a passenger, “you’re sitting so stationary inside it, yet there’s this burst of energy six inches above your head where the top of the taxi is reacting with the world around it.”

Every city has their own cab culture—from London’s black cabs to New York’s checkered yellow. In Tokyo, the tall roofline and the large doors of the boxy Toyota Crown dominate Tokyo’s streets. To differentiate themselves from the approximately 50,000 other cabs driving throughout Tokyo, companies adorn their taxis with their own vibrantly lit roof sign. The colorful symbols and shapes—ranging from cute kittens to bright pink cherry blossoms to cartoon owls—help customers navigate the sea of vehicles. “I think it’s almost like the modern-day version of an illuminated family crest,” says James.

Over the course of 26 years and 12 trips to Japan, James spent his evenings taking photos of the flow of taxis in the neighborhood of Akasaka, one of Tokyo’s central business districts. Lugging his 6×6 Format Hasselblad camera on his collapsible bike, James went on a crusade to capture and preserve the shining roof signs. He pedaled furiously to snap photos of the rarer signs of independent driver-owned taxis, known as kojin taxis, and smaller cab companies that only operated a few cars. A selection of his photos were published in the 2012 book Tokyo Taxi, however the streets of Tokyo look much different today.

When he started the project, there were approximately 1,024 cab companies, James wrote in his book. Now, James estimates there are only about 70. Increasingly, kojin taxis and family businesses are being absorbed into larger cab corporations, causing the number of diverse taxi signs to slowly disappear from roadways. “Many of these taxis don’t exist anymore,” James says. “All of these unique signs are now being homogenized.”

Tokyo’s taxi system began in 1912 with just six Ford vehicles. It has since expanded into a large multi-company operation, with approximately 49,000 taxis on the road providing 330 rides per day as of 2014. The majority of the taxis belong to one of the major firms collectively known as Dai Nippon Teikoku or “Empire of Japan”, an entity that has been around since World War II.

In 1986, James was walking through Tokyo at night when caught a glimpse of a taxi sign he had never seen before. It was a white and gold horizontal bar with a little monkey flanking one side. The friendly-looking cartoon had its arms down at its sides, and rather strange looking nipples, James recalls.  He discovered that the taxi, under a company named Monkeys, was one of two in all of Tokyo.

“That’s just so sexy,” he says. “That this city of 14 million people has thousands of taxis, and two of them—just two of them—have this remarkably unique sign of a very cheeky-looking monkey.”

James spent from 1986 to 2012 obsessed with finding and shooting all the rare breeds of taxi signs, making a dozen trips and amounting about 19 months total in Tokyo. Some of his favorite signs are the green star of the Edosou Group Taxi Co., the cute little puppy on the Wan Wan taxi, and the bubblegum-pink flower of the Sakura (which translates to “cherry blossom”) Taxi Co.

After a night chasing taxis, James would have trekked about 40 to 50 miles on his bike. He always started taking pictures after 2 a.m. Emerging from a two-dollar soba noodle bar, he cycled around the streets of Akasaka snapping photos and conversing with drivers to learn about their lives.

Every taxi driver faces the same kinds of challenges, yet they all have independent experiences, explains James. Drivers, predominantly men, work about 20 hours a day, according to James. Kojin taxi drivers may even clock in more hours, as they tend to work until they meet their target earnings since they don’t have anyone controlling their workload, write Walter Skok and Satoko Kobayashi in the journal Knowledge and Process Management.

Taxi drivers show pride in their work, says James, explaining in his book that the cars are kept immaculate despite some being 20-year-old models. Some drivers wear white gloves and cover the seats in white cloth. It’s also a very social job, many of the cab companies’ make conversation and proper etiquette a service requirement.

James took upwards of 15,000 photos and documented 950 taxis, but his book could only feature a fraction of the dying breed of neon signs. What is still a major feature of the hypnotic lights of Tokyo may soon only exist in James’ photos.