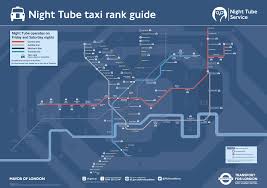 Transport for London (TfL) has released a Night Tube map

showing all the stations with taxi ranks nearby, writes The Standard. Late-night revellers can use the map to find out which stations have taxi ranks available to help them complete their onward journey.

Taxi ranks are available at about 90 stops along the Night Tube network, which has launched on the Central, Victoria, Northern, Jubilee and Piccadilly lines.

About 60 per cent of the stations on the network have a working cab rank nearby, according to the map. The Night Tube network reaches about 143 stations across the five lines. The Piccadilly line became the fifth to launch its round-the-clock weekend service on Friday, December 16. It followed the launch of the Night Tube on the Northern line in November, the Jubilee line in October and the Victoria and Central lines in August.

The Licensed Taxi Drivers Association (LTDA) previously called for every station stop on the 24-hour service to have a working cab rank outside. It urged local authorities across the capital to work together to ensure taxi ranks were installed close to stations to increase the safety of Night Tube passengers.