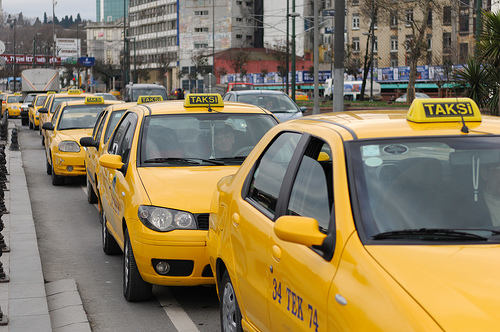 Taxis offer an easy way to get around Istanbul but the drivers feel threatened with the rise of Uber, writes the Daily Sabah. The ridesharing app Uber has drawn a backlash from Turkish drivers for its unregulated service and alleged tax evasion practices. Drivers hope a ban on Uber will be introduced as they took their battle against the company to the courts

Uber, which faces protests by taxi drivers since its start seven years ago, incites the wrath of Turkish taxi operators as well after its foray into the Turkish market in 2014. Drivers told Daily Sabah the U.S.-based company damages the business and is apparently illegal but continues its operations thanks to legal loopholes. The head of BiTaksi, a Turkish app offering commercial and legal taxi services, meanwhile, says Uber dodges taxes by running its Turkish branch from abroad.

Turkish taxi drivers say the company takes advantage of the lack of inspections and legal loopholes to freely operate in the country where its services are confined to Istanbul currently. Taxi drivers, especially those working in big cities like Istanbul, have long complained of „pirate taxis“ that lack official permits required for drivers and the police have considerably decreased the number of these taxis after frequent crackdowns ending up with fines on drivers. Still, Uber enjoys a virtual immunity due to a lack of laws banning its online services.

For Istanbul, where taxis are a staple of daily life more than smaller cities, transportation authorities say Uber operates in a grey area as its commercial transport service is not covered in any regulation.

Speaking to Anadolu Agency (AA), Hüseyin Duman, the head of the United Taxi Drivers Association, said Uber is engaged in unfair competition both for drivers and passengers. „It hurts commercial interests of drivers. They do not have any permit or license plates exclusive for taxicabs,“ he says, pointing out to the plates the drivers pay astronomical fees to obtain. „So, they don’t comply with working conditions set out in regulations for taxi drivers and evade fees and taxes mandatory for taxi drivers. They arrange taxi fares without any regulation. This is similar to pirate taxis and cost us loss of customers,“ he said.

Duman also slams Uber’s defense that it only acts as a mediator between drivers and fares. „They don’t shoulder any legal responsibility but it is clear that they have a bigger role in the business than they admit. They developed the app and update it, they supply customers to drivers, they manage the maps used in the app and takes a 20 percent share of the fares,“ Duman says.

He said they have been in a legal struggle against Uber since last year and highlights that some vehicles employed by Uber do not comply with standards for commercial vehicles. „It is illegal to carry passengers for a fee if you don’t have necessary documentation,“ he said. Hundreds of Uber cars were banned from traffic, Duman claimed, after traffic police found they lacked papers necessary for transportation. „It is the biggest evidence that Uber is illegal. It is obvious there will be a blanket ban against this service sooner or later. Our association already took legal action but we hope it will conclude soon,“ Duman added.

Nazım Salur is the founder of BiTaksi, a popular app which resembles Uber only for its real-time ridesharing feature. However, instead of recruiting non-commercial drivers, BiTaksi arranges the meeting of commercial taxi drivers with their fares in a convenient way. Salur complains that they are not in a level playing field with Uber as the latter „operate without heeding fair competition rules.“ Salur told AA that Uber conducts its financial affairs by a company based abroad. „So, they are exempt from taxation in Turkey under current regulations whereas BiTaksi is subject to taxation,“ he says. Still, he is not in favor of an outright ban on Uber. „We think it is better to have more companies in the market for such a public service. Moreover, we will have a chance to showcase the success of local enterprises in this field by competition,“ he said.

All across the globe, taxi drivers have staged sometimes violent protests against Uber which they accused of unfair competition by not registering its vehicles as commercial taxis and avoiding paying taxes while passengers hail the service as a convenient means of transportation. Its services with luxury cars, therefore, still attract a large number of customers around the world though some countries moved to pass the laws to prevent Uber and apps like it from earning without taxes. Uber services were banned in a number of countries including Spain, Belgium, Romania, the Netherlands, Italy and Germany but a ban is not in the works in Turkey at least for now.

BU: Will Uber be banned in Turkey?